…It’s a rainy, gloomy day here in Faridabad. The streets are flooded and the slum is a sea of thick mud and cow dung. For the first time in more than a month, I am the only foreigner living in Mamta’s home. It is eerily peaceful for India. The ever-present sounds of chanting salesmen, children shouting, impatient drivers honking, and sputtering engines billowing clouds of smoke are nothing but memories of sunnier days. All that I hear are the patter of rain, the distant pounding of nearby metal factories, and the faint call to prayer from a faraway minaret. The air, for once, is fresh. The usual airborne industrial debris seems to have vanished. The smoke has cleared. The dust has been beaten to the ground by drops of water. Taking deep breaths and being able to listen to my own thoughts have never seemed like the luxuries they are now.

Life among the slums here is tiring. Trying to make a difference is exhausting. Throw in a little ‘Delhi Belly,’ a common cold, and some water scarcity and it would be tough for anyone not to miss the comforts of home.

But, then I go outside. Even though I sleep on a wooden plank, wash my clothes in a bucket, and use a cup to rinse my body in a candle-lit bathroom, I realize that what is important in life is not what we have but what we are able to do with what we have.

I have the ability to read and write, I was born free and equal, and I am loved by a family that would move heaven and Earth to ensure my health and safety. I’m set. Much should be and is expected of me. The children and young adults here, however, can’t read or write, they are neither free nor equal, and their families can hardly afford to put food on a table they don’t even have. Despite living at the bottom of what will soon be the most populated civilization in history, however, the children here are among the happiest I have ever met. They exude hope even when others have lost it. They are skin and bones but tough as nails. They act as though they have everything going for them even when everything is actually going against them.

The slum’s residents have every right to be angry at the world. Throughout their lives, they have been treated as inferior 4th class citizens. They perform back-breaking, unhealthy, and often demeaning work without ever second-guessing their status. They and their ancestors have been denied healthcare, education, and opportunity for so long that even when they are offered such services they do not trust or understand them. When I take patients and their families to the hospitals, some doctors scold the parents for waiting so long and having to have a foreigner bring them in for treatment. However, are they really the ones to blame? I don’t think so.

Living in India is no longer the novelty it once was to me. Being 8,000 miles from home now seems pretty normal. I no longer flinch when I round a corner to meet a massive bull staring into my eyes from three feet away. I no longer want to fumigate myself or my clothing after spending the day in a slum.

The hardest part about my return to India has not been adapting to the culture but adapting to the scale of India’s problems and the widespread lack of regard for them. Education of the poor here is a disaster and I believe it is the central root of India’s vast poverty, overpopulation, and massive public health dilemmas. To make matters worse, the caste system cripples altruism and any attempts to promote equality. Some of the high-caste locals who only know the basics of our work think that our impoverished children from the slums cannot perform to the same standards as “normal” students. In true Indian honesty, they tell me directly that I am “wasting my time.” All someone needs to do is meet one of our students to know that this is not true.

How can you think I am wasting my time if you have never met our students? How can you understand their problems if you never go to their communities? How can you stand to watch them suffer and even die without wanting to find a solution?

I experienced the most egregious and bewildering example of the caste system last year in, of all places, church. It was my last Sunday mass with the sisters before returning home and I planned a special, surprise event.

–Above: Moni, Manish, and Chandani. Below: Prianka– 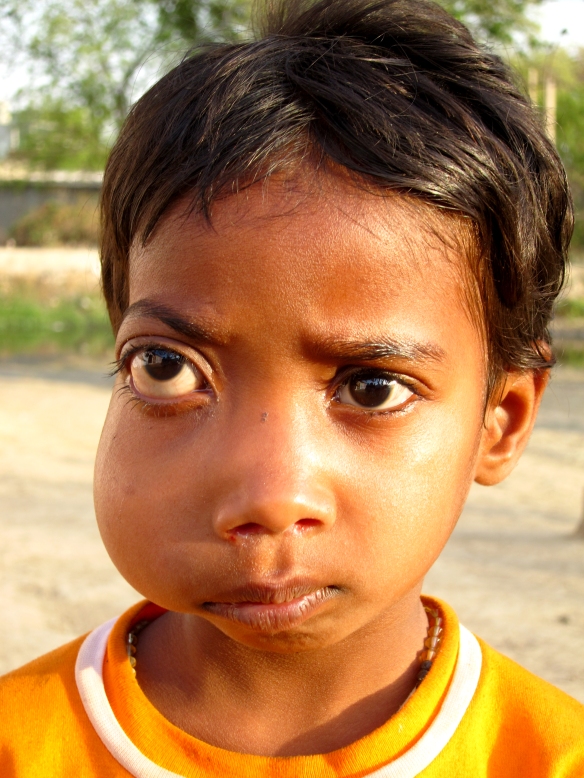 During mass, I had all of the pediatric patients I had been caring for (and their families) come meet me at the church entrance. When the parish priest finished his sermon, he signaled me to come address the congregation (all of whom speak perfect English). I walked down the aisle from the back of the church with six severely deformed children and their parents following me. We all turned around and faced the congregation. I took the podium and introduced each of the children, their medical conditions, what I had done for each of them to date, and when their operations and/or treatments were scheduled. I then made one simple request for help transporting the children to and from the hospitals and physicians that would cure them. I thanked the congregation in advance for their generous help and for their hospitality during the three months I had attended their church.

Once the service ended, I stood at the back as everyone passed to shake my hand, hug me, and thank me for my work here. They then passed by the children, entered their cars, and drove away. No one ever said a single word about helping these unfortunate and astonishing children. Even when I brought devout lifelong Catholics children with obvious and dire problems and explained exactly what each of them needed and when, they unanimously declined to help.

When I told the sisters that no one had offered to support us, Sister Pushpa said, “We knew that no one would help you but we did not want to crush your hope.”

India, like these children, has so much potential. A relatively recently liberated democratic republic with 1.25 billion hard-working and patriotic people should be one of the world’s most formidable economies and superpowers. Yet, the ultimate definition of success here is the ability to leave. It’s a race to the top and every man for himself. The brain drain and caste system are debilitating and undeniable problems for India and its future.

Several of our new students this year, including Raj Nandani (above) are of the Scheduled Caste, otherwise known as the Untouchables, Dalits, or Shudras. They are members of the the lowest castes that make up approximately 16% of India’s population.

Many of our students’ parents are so illiterate they cannot even sign their names. The photo above is of a mother having to use her fingerprint to sign her daughter’s application for school.

I took the above photo of Manisha 13 months ago, when we wrote her name because she could not. 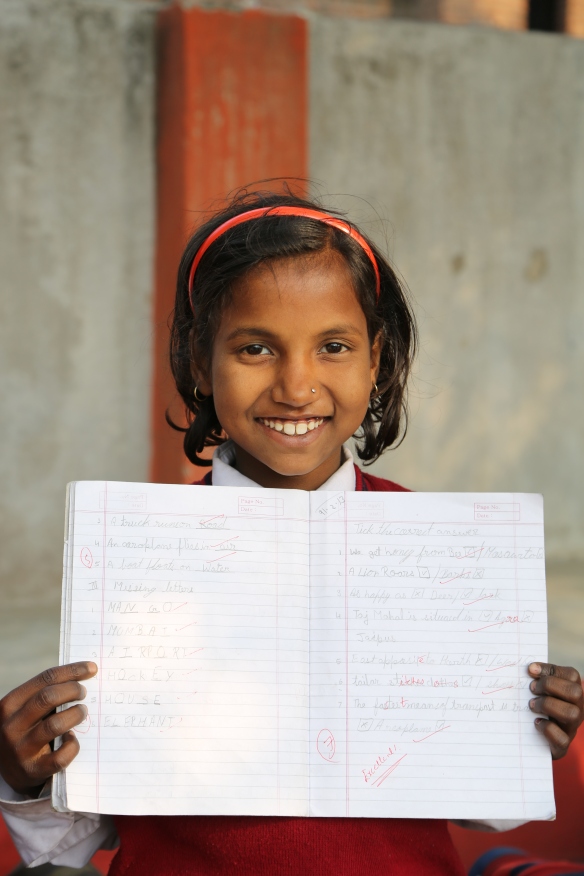 This is Manisha now, holding up her impeccable homework that has been marked “excellent” by her teacher. When people believe in you, you believe in yourself; you become proud of your work and you try even harder the next time. All these beautiful children need are opportunities for challenging learning and positive feedback when they succeed. We have done this at Squalor to Scholar and in one year our students have shattered everyone’s expectations of them.

Once our students are finished rocking their exams later this month, I’ll be heading out into the slums before dawn every morning with an iPad to Skype with sponsors and donors all over the world. I’ll be in touch soon to organize the video hangouts and share with you in live broadcasts some of the most inspiring children you’ll ever meet.