…Thirty-six percent of people in India (439 million) are illiterate. That’s right; there are more illiterate Indians than there are people in the United States, Mexico, and one-third of Canada combined. 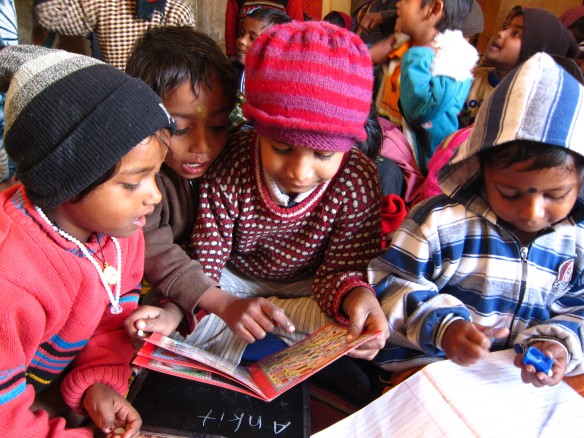 Of Indian urban cities with more than 1 million people (of which there are 45), 24.1% of the population lives in slums. Of these people, only half can read and write.

In India, if you make more than Rs 32 (62 cents) per day, you are above the government’s poverty line and are thus ineligible for state and federal subsidies. A liter of milk, in comparison, costs Rs 40 (77 cents). It would take more than a day of work to earn a single quart of milk. Even if you worked every single day for a year at this rate, you would only make $226.30. Amazingly, 37% of Indians (448 million people) still live below this line.

My point is this: if you’re poor and uneducated here in India, there are literally millions of people just like you. There are more than 600,000 people living in slums just here in Faridabad! That’s the population of Washington D.C. The slum in which I teach has more than 30,000 residents alone.

These numbers are nearly impossible to comprehend. However, I am beginning to understand the diverse mentalities surrounding this massive dilemma. As the rich become richer, the poor become poorer, and the numbers of each continue to soar, increased selfishness is the logical progression.

I used to wonder how Mukesh Ambani, one of the top-ten wealthiest people in the world, could live in a 27-story nearly $2 billion home in Mumbai overlooking mass poverty. I don’t have $27 billion in the bank like Mr. Ambani –even if I did I wouldn’t spend it like he does– but he is not alone in his actions. I shake my head every time I pass the Rolls Royce dealership in Delhi or see a big BMW zip through traffic with disregard of others.

But even Mr. Ambani can’t single-handedly bring his 448 million fellow countrymen out of abject poverty. None of us can. We must start small, knowing well that we can’t help everyone.

Helping begins with understanding. Throwing money and resources blindly at a cause without proper planning and knowledge of the underlying needs is a path to waste and disorder. It’s easy to look into the school here and say, “They need shoes, desks, Crayons, workbooks…” But, is that really the best way we can help them? What happens when the desks make the room overflow, when the kids would rather just be barefoot, when there is no paper to use the Crayons with, and when the workbooks become covered with scribbles from 80 other students? What happens when the other volunteers and I get on a plane and fly 8000 miles into the horizon?

My goal is to get on that plane knowing that at least one life has been and will continue to be drastically changed by our efforts here. I have a project in the works that I think you will like, that will engage you, and that might just bring a life of opportunity and prosperity to a few lucky kids who would otherwise just be, well, one in 448 million.

Please bear with me as I continue to work out the fine details. In the meantime, hit me up with ideas if you have any. I’ll reveal my own plans once I am certain of their feasibility and efficacy.

Visit squalortoscholar.org to learn how to donate, volunteer, or just be inspired!

Support Us On Amazon

Visit Amazon Smile and Squalor to Scholar will receive a percentage of every dollar you spend...100% of your Amazon shopping should be through Amazon Smile!