…After another installment of banana-chocolate crepes in Rishikesh, we set off for the Himalayan mountaintop town of Mussoorie at an elevation of 6,170 ft. The drive was a hair-raising, nausea-inducing, and knuckle-whitening adventure through tight switchbacks at high speeds with no guard rails. 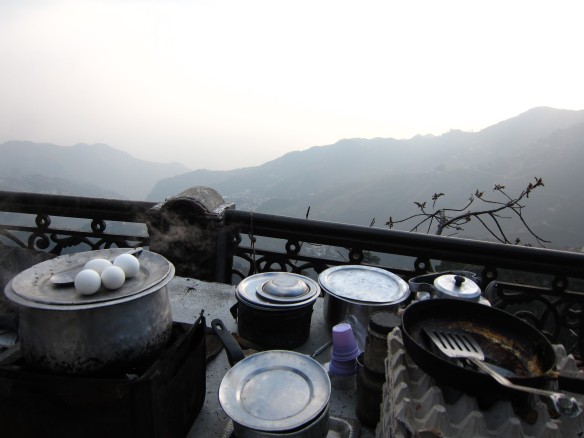 The name of this state is Uttarakhand, which happens to be having its major local and state government elections on Monday. Every few miles, we passed another procession of fanatical supporters waving flags on the backs of motorcycles. The parties have the most odd names and icons. This party, for instance, looks to be the “Ceiling Fan” party. I guess donkeys and elephants really don’t make much sense either though. The politicians and their advocates drive around with huge loudspeakers on their cars to campaign. All I can think about every time is the Blues Brothers.

With clouds and fog filling the valleys, the temperature at 6,000 ft was unexpectedly frigid. We played another game of “find a decent hotel.” None of them were heated. With temperatures reaching the mid 30’s at night, we each rented small heaters for Rs 200 ($4). I have been wearing everything I brought, including long johns, wool socks, two jackets, a ski hat, and fleece gloves I bought on the street. Mussoorie is a popular honeymoon and holiday destination for all Indians, especially in the summer when temperatures are more comfortable than in the plains below. It’s definitely the off season for a reason now. However, we had a great time walking the famous markets and exploring what Indian tourism feels like. 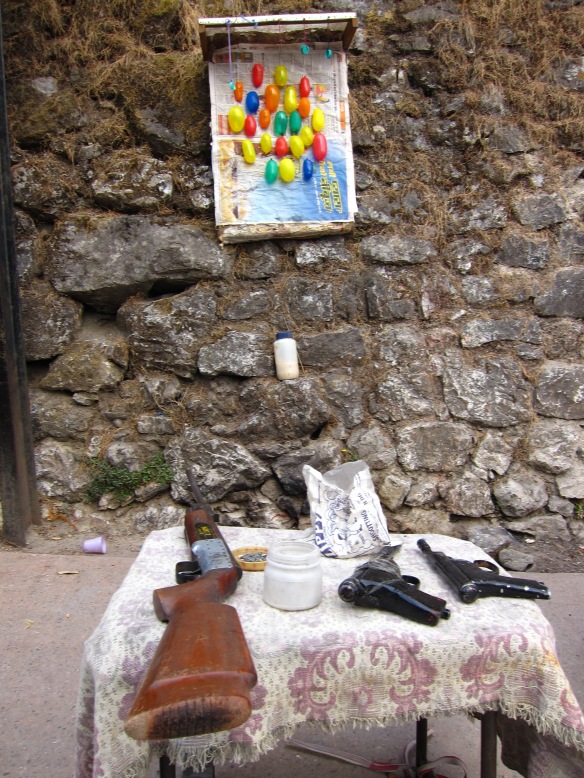 –An eye-injury waiting to happen– 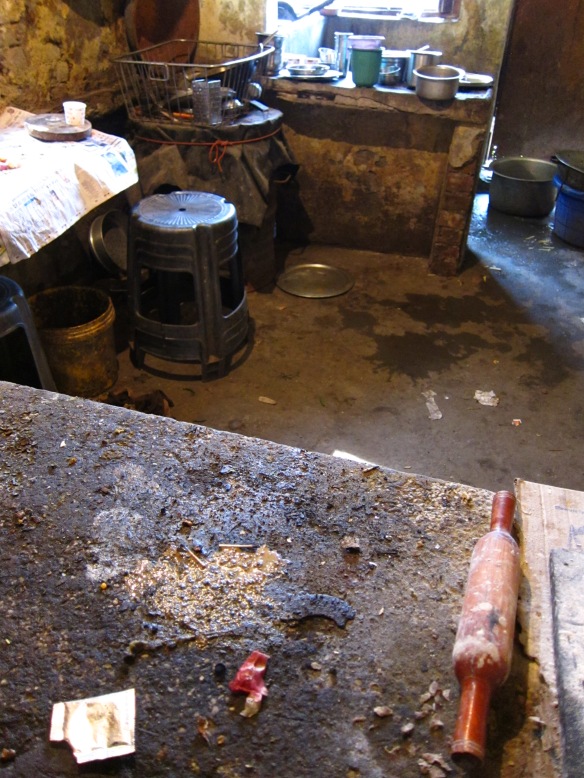 We walked the markets some more and had a delicious meal of pad thai, which I had conveniently been craving, for dinner at a Tibetan restaurant. We also observed another wedding procession on the way. 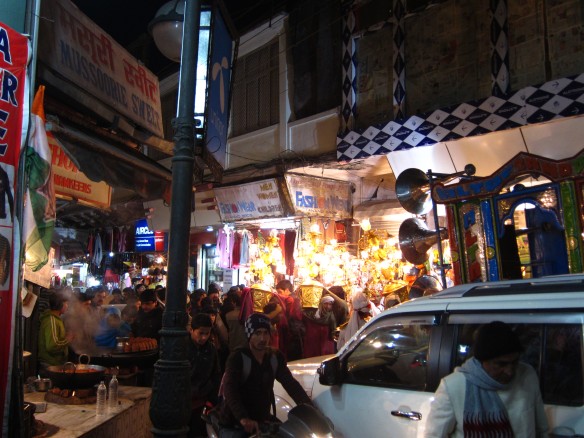 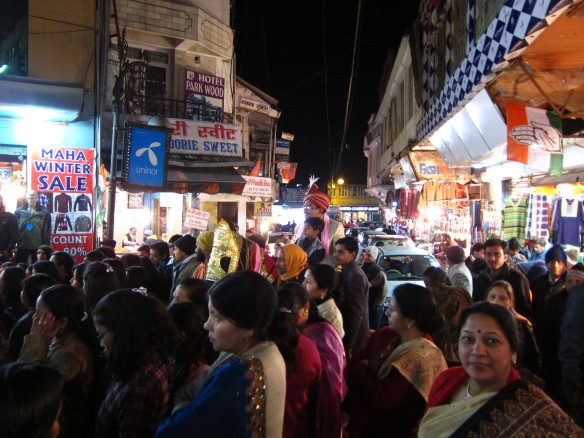 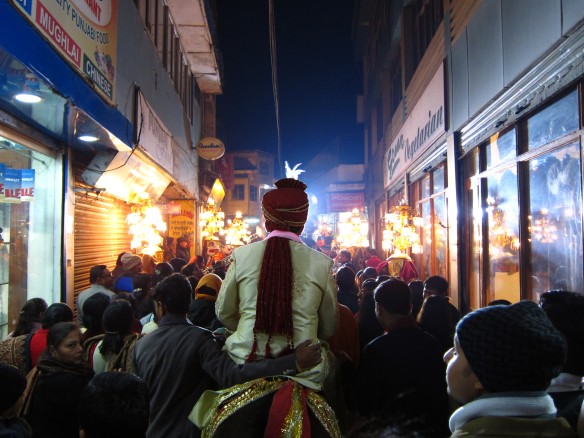 After a frigid night (our little rented heaters had no chance of competing with the cold marble floors and walls) I wiggled my sleeping bag over to the window to see this: 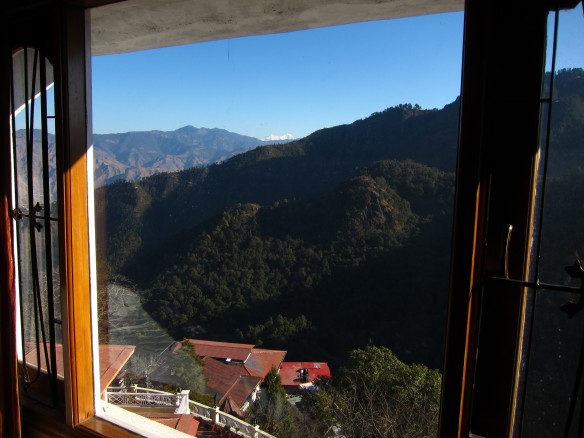 I challenge you to find a room that costs $12 per night with a better view than this (please note the snow-capped Himalayas in the background, beyond which is China). We then climbed up to the top of Gun Hill (400 ft higher) to have a better view. 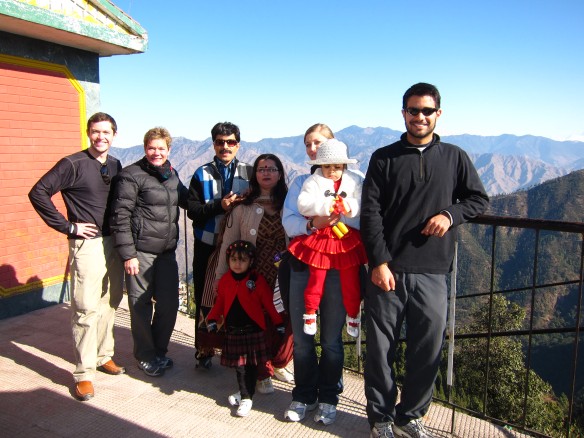 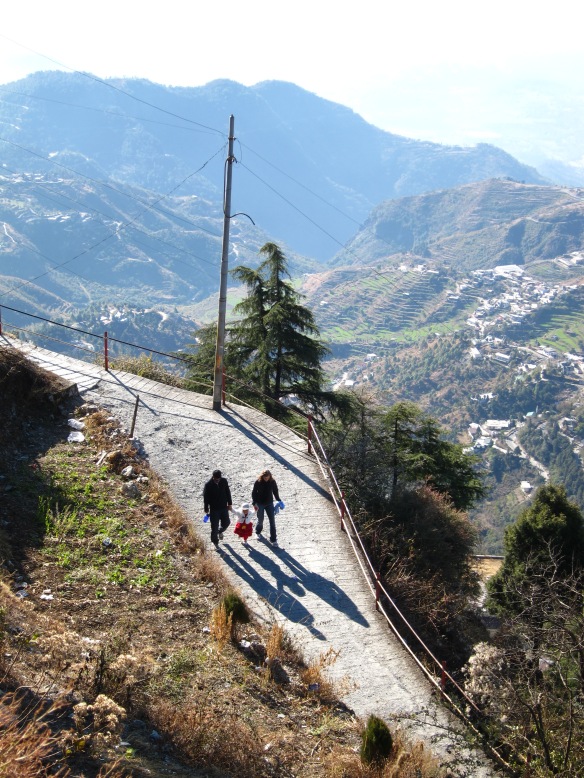 I had one of my favorite South Indian dishes for breakfast, called uttapam:

Then, we visited Kempti Falls, another popular summertime destination. Unfortunately, it was down at the bottom of the next valley to the North. We had to drive down, then back up to Mussoorie, then down again into the plains on our way home. Signs reading “Speed Thrills But Kills” and other cheesy but true reminders lined the roadways in bright orange. However, the signs need to be in Hindi too. Although they were definitely touristy, we all enjoyed the waterfalls. I haven’t posted any pictures of my host family yet. Here are just a couple. 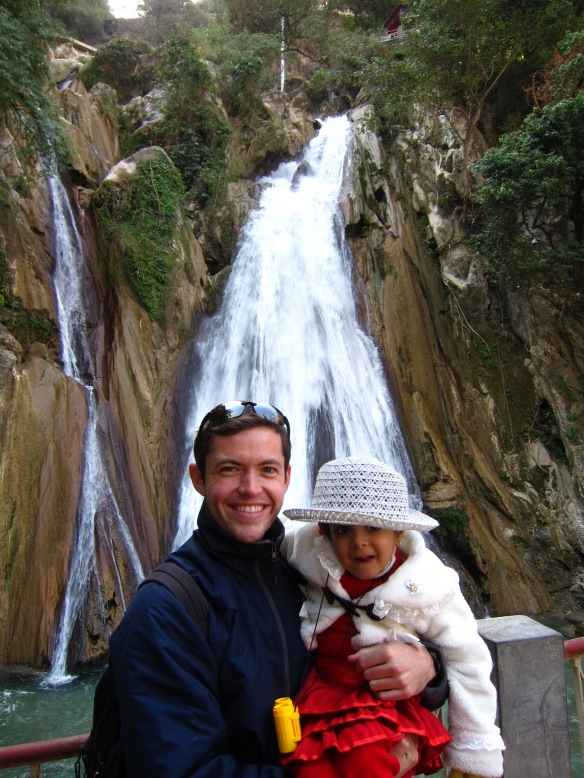 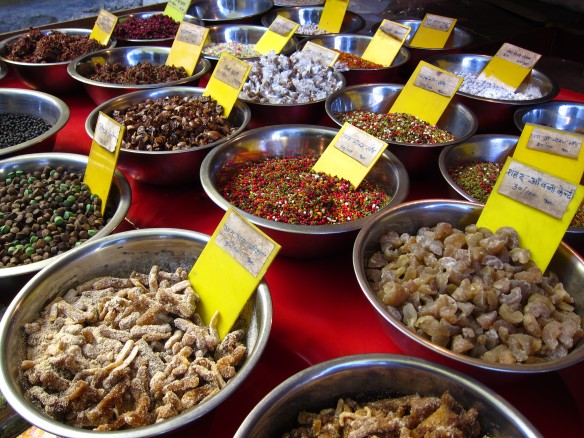 Visit squalortoscholar.org to learn how to donate, volunteer, or just be inspired!

Support Us On Amazon

Visit Amazon Smile and Squalor to Scholar will receive a percentage of every dollar you spend...100% of your Amazon shopping should be through Amazon Smile!