…This week has been my first taste of government-run healthcare on a massive scale. All week, my standards of and preconceived notions about healthcare, especially on such a large scale, have been incessantly challenged and modified. This blog post has been delayed because, quite honestly, I haven’t had the same thoughts about anything here for more than 30 minutes. I have at times been frustrated and appalled while at others inspired and impressed. It has taken me until now to process what I have seen and feel prepared to share what I learned.

I am extremely fortunate to be able to work inside a public hospital here because, like most government-run operations, it is shrouded in bureaucracy and red tape. I am the first volunteer from my organization to be given access here in recent years. Luckily, this fact also means that the physicians and staff are incredibly happy to see me and generously offer me their knowledge and time. 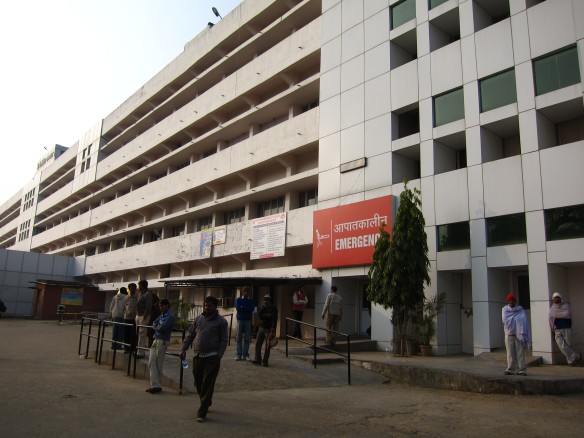 This is the main district government hospital for all of Faridabad and the surrounding communities. The statistics here alone are staggering. Although it has only 204 beds, it is the main hospital and only public surgical setup for a population of 2.5 million people! Last year, the outpatient department alone saw 380,000 patients and more than 26,000 new patients were admitted to the wards! With only four operating rooms, they conduct more than 400 operations per month.

My first day here was marked by contrasting emotions and endless rhetorical questions. I spent most of the day sitting and waiting for hospital administrators in their relatively plush offices complete with personal waiters to tell me what to do or give me some work. A constant river of physicians and staff passed through to give their reports and take orders. Although I was impressed by the quantity of work that appeared to be occurring, I wondered how much of it could have been streamlined. No one offered me a tour of the hospital, which I thought was quite odd considering the incredibly warm welcome I initially received. 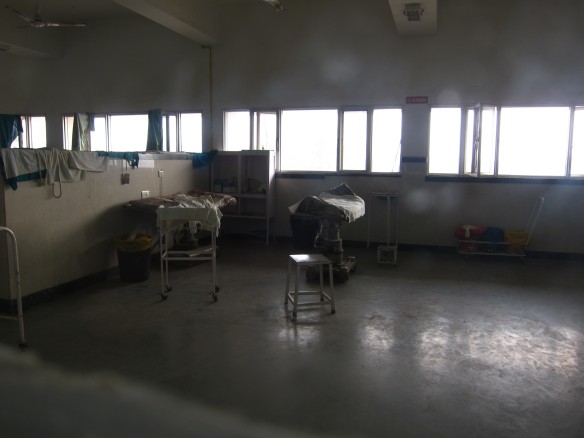 Toward the end of the day, I performed my own investigation by walking the halls alone. After recent rains and cold, gloomy weather, I found the hospital to have had a frigid, unsanitary, and eerie atmosphere. Throughout the day, the temperature inside the hospital likely never surpassed 55 degrees F. Mud and dirt had been tracked throughout the halls and stairwells while the families of patients slept on the floor in small empty lobbies next to the only elevator. Six to eight patients were crammed into wards the size of the boss’s office without any privacy or medical equipment (other than beds). Rare IV stands and bags were some of the only treatments I could see. Occasional and alternating smells of urine and formaldehyde coupled with sights of empty blood-stained beds and mishandled biohazards sent shivers down my spine. I came home appalled by the apparent lack of patient monitoring and sanitation standards.

–The baby was delivered a while ago. Why is this blood still here?–

–Locking the main doors of the hospital with a chain (isn’t this an obvious no-no?)–

However, my experiences over the subsequent days were entirely different. The next morning, I brought two other volunteers with me. One of the head medical officers, a very outgoing physician who seems to have earned much respect from his colleagues, gave us a tour of the entire hospital. We stopped at every door as he introduced us to every doctor in the building. Even in the outpatient department, where more than 30 patients were sometimes lined up outside an office, each specialist would invite us to sit down and involve us in his or her patient interactions and thought process (more on this in a later post…it was incredible). 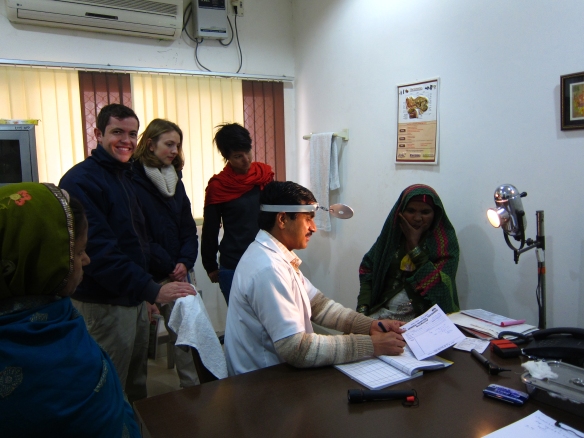 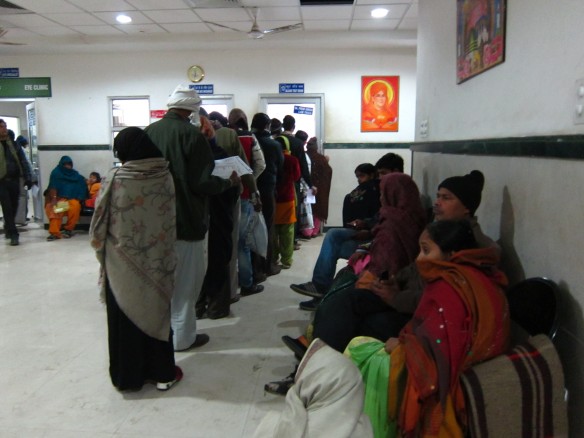 –Line for one of the offices–

On my first day, I only received a cursory overview of the hospital. I saw exactly what any patient or outsider would have seen just walking around. On the following days, however, I got to go behind the scenes and see where the actual medicine is being practiced. Everything in India is nothing like what it initially seems. First impressions are utterly useless here. What I observed with the doctors were hopeful initiatives and altruistic undertakings that were 180 degrees different from what I saw in the wards the evening before. Much of the Indian culture confuses me, such as the differentiations within the hospital. Why would you have a packed and smelly medical ward with almost no technology when, down the hall, you have a spotless ICU with some of the latest equipment?

However, one thing here is certain! Almost all of the physicians I have met here in India have been extremely proud of their work. They believe and will outwardly claim that India’s healthcare system is among the very best in the world. They know they don’t have the same technology, financial power, or research that we do in the developed world. But the doctors believe that, with what they have, they are able to practice more effective and more efficient medicine than even America. Multiple doctors have even tried to convince me to come to medical school here.

Upon first hearing such statements, my gut reaction is just to nod in politeness and let the matter rest. But, their insistence is so adamant that it begs further contemplation. At first, I thought to myself, “You have to be kidding!” But, as my mind continues to wrap itself around this unusual country, I’m beginning to see what they mean.

The physicians here are proud because each of them is able to care for thousands of patients every year who have almost nothing. There are private hospitals scattered all around the country that range from tiny outpatient clinics to massive sub-specialty complexes. However, most of the population cannot afford care at these facilities. For them, the public option is their only option. In fact, many of the patients here are below the poverty line (which, in India, is placed at an obscenely low income of Rs 40 [80 cents] per day).

With a steadily increasing population of 1.21 billion people, India is on track to overtake China as the world’s most populous country by the year 2030 (when the population here is estimated to be 1.53 billion). Guaranteeing free medical care to a population four times that of the United States with a GDP only one tenth the size is a bold but noble undertaking.

–A sign outlining this very fact ironically just outside the hospital–

It is financially and statistically impossible to give everyone here the same level of care we are accustomed to back in America. These doctors are entrusted with and passionately care for a sixth of the entire planet’s population. These government physicians take salaries ($800 per month) that are less than one fifth that of their private practice counterparts even though their patient flow is likely quadruple or higher. These doctors love what they do and, God bless them, will always have a steep hill in front of them.