…From my experiences, Sikhs have always seemed like incredibly benevolent and optimistic individuals. I have been very curious to learn more about their religion and visit a Gurudwara (Sikh house of worship, meaning literally “Gateway to the Guru”). With the hospital unusually quiet this morning, today was my chance to break away and visit the most prominent Gurudwara in Delhi, the Gurudwara Bangla Sahib.

Sikhism is the fifth largest organized religion in the world. There are more than 19.2 million Sikhs in India and 700,000 in the United States. According to the pamphlet I was given, “A Sikh is a person who believes in one God [Ik Onkar] and the teachings of ten Gurus enshrined in the Guru Granth Sahib, the Sikh Holy Book.”

Once I arrived at the Gurudwara (after nearly two hours of travelling), I was given a tremendously warm welcome by a white-bearded volunteer who explained to me what I should do. There was a specific place for foreigners where I left my shoes and socks and was given a triangular cloth to tie around and cover my head.

I then joined the masses in washing my feet in a small pool of water and walked into the courtyard surrounding the temple itself. I followed everyone to the left as we entered to a long set of what looked like ticket windows.

I observed as people bought aluminum foil bowls containing food, deposited their receipts in a large metal drum, walked across the courtyard to two men who took half of it, and then walked into the temple with what remained. I was rather confused. I spoke to this man, who was taking half of everyone’s food, to learn more.

–The congenial man taking half of everyone’s prashad–

The man explained that the food was kadah prashad. For Rs 10 (20 cents), people bought a bowl, gave half as an offering to the Holy Book, and took the rest home. I tried to find out what happened to the half that was donated but struggled with the language barrier and let it go. I went back, bought some kadah prashad, gave the man half, and walked into the Temple.

The temple was rectangular in shape with live music and ceremonial procedures being conducted at an altar in the middle of the room (which contained the Guru Granth Sahib). To the left, right, and back of the space, people sat on the plush carpet and listened to the music in motionless solitude. The steady flow of worshipers moved clockwise around the altar, bowing at various significant points throughout the temple. I had noticed music playing outside but had not realized that it was coming live from inside the temple. The music was a seemingly integral part of the religious experience. It was loud, consistent, compelling, and amplified throughout the Gurudwara so that everyone could hear it. After a while, three new musicians rotated in, giving an entirely different feeling to the space. 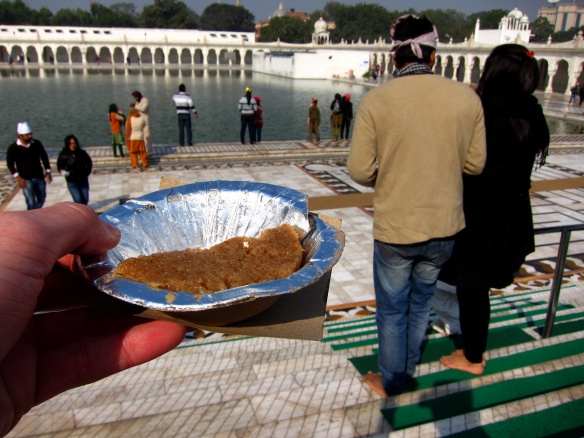 After a while, I made my way to the exit, outside of which dollops of prashad that had been obtained at the entrance were handed to each worshiper. My questions were answered, at least partially. I took my prashad to the steps next to the exit and enjoyed the sacred pudding-like delicacy.

–Man looking over the Sarovar and main temple–

I continued to follow the worshipers clockwise around the sacred water feature called the “Sarovar.”

The entire Gurudwara was a flurry of activity and unusual rituals. This man was filling empty plastic bottles of all types with holy water.

–Lining up for lunch–

The Gurudwara Bangla Sahib is not just a temple; it is also a school, hospital, and kitchen. And what a kitchen it is! As I approached the kitchen and dining hall, hundreds of people were already lined up for lunch. Inside, the kitchen was stirring with dozens of volunteers and Gursikhs (Sikhs completely devoted to the ‘true’ guru). Groups of people from different races, ages, and religions rolled chapatis, cooked chapatis, filled and transported enormous pots of soup, cleaned dishes and silverware, and prepared the dining room for the next wave of diners. 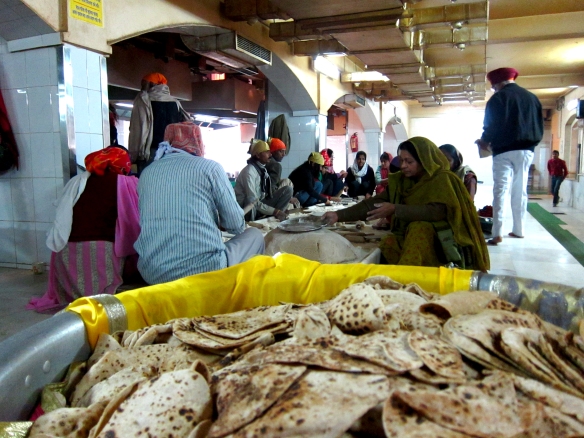 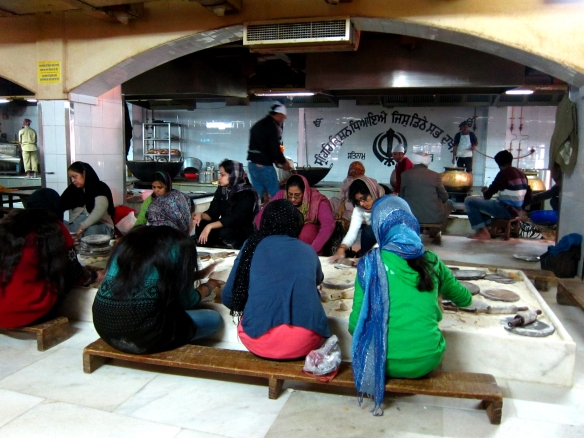 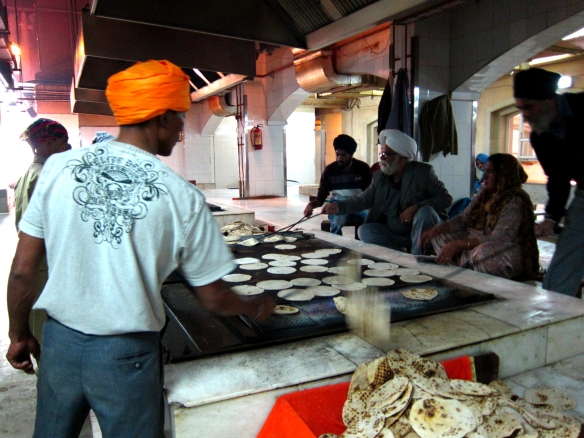 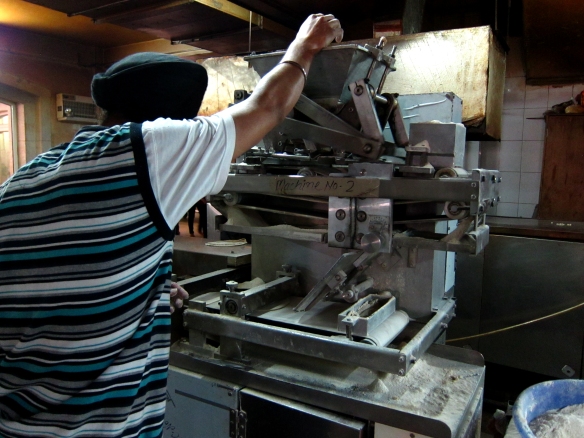 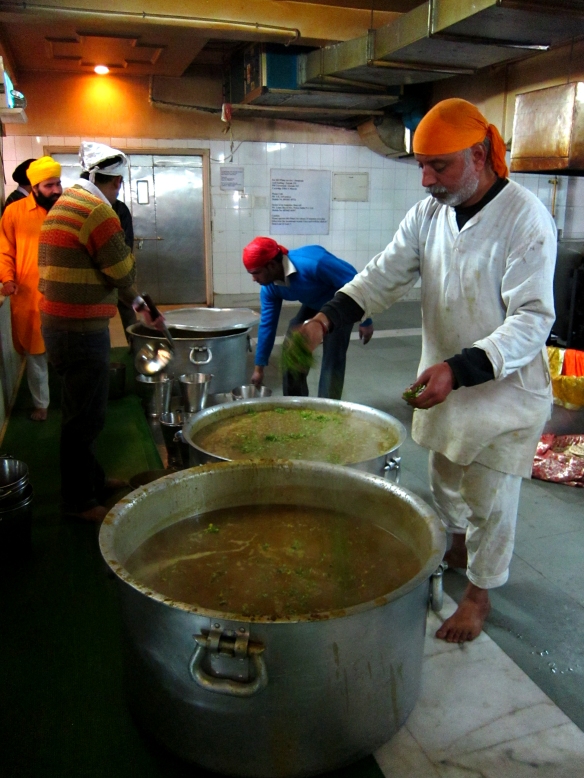 In the Sikh tradition of langar, any person of any faith or background is welcome to eat at the Gurudwara for free. Between 10,000 and 20,000 meals are served here every day! All ingredients are donated and most of the workers are volunteers. The food is strictly vegetarian so that all may eat equally without restriction.

The next time I looked at the dining room, it was filled with obedient and hungry guests. Wanting to try some of the cooking, I went back to the front where the doors were just closing. As an obvious outsider, I was told to go around to the side, where I was let in and showed one of the last remaining seats on the floor.

Everyone sat in silence as chapati was handed to us and aloo (potatoes) and dal (lentil soup) were poured into our metal trays. I was amazed and impressed by the clean atmosphere, efficiency of the service, and quality of the food. Surprisingly, it was actually one of the best places I have eaten out in India!

After a few more chapatis and helpings of aloo, I deposited my tray and spoon at the exit. Feeling uneasy about taking food for free, I went back into the kitchen and spent 30 minutes rolling and flipping chapatis with the locals. Speakers in the kitchen and dining room played the continuous spiritual music from inside the temple. No one spoke, except when I would mess up and then they would all laugh and help me fix my mistake. Although I probably slowed production more than I helped, it was a fascinating undertaking to be a part of.